Luckily, South Africa is blessed with epic, world-class tourist destinations, the kind that attracts a steady flow of foreign travelers under “normal” circumstances. Fortunate locals are spoilt for choice when it comes to planning a local breakaway.

One such famed attraction is South Africa’s verdant Garden Route – a spectacular stretch of coastline on the eastern shores of the country that is peppered with must-see sights and hotspots. Spectacular views, misty indigenous forests, nature reserves, seaside resorts offering excellent cafés, curio shops, and fresh seafood, and a wide selection of outdoor adventure activities, are just a few of the reasons this east coast trail is so well-loved.

The charming coastal towns of Plettenberg Bay, Knysna, Wilderness and Sedgefield are all a short drive from George Airport, approximately six hours drive from Cape Town and twelve hours drive from Johannesburg – perfect for a long weekend or an extended stay. But the veritable jewel in the Garden Route crown is undoubtedly Plettenberg Bay, affectionately known as “Plett”. It is not hard to understand why, thanks to Plett’s incredible natural surroundings, beautiful and pristine beaches, plentiful marine life, leisure pursuits, adventure activities, wildlife sanctuaries and luxury accommodation destinations.

When staying in Plett, the bucket list is endless. There are horseback safaris, guided swimming with seals, canyoning, marine tours, boat cruises, or simply strolling the sandy lengths of several Blue Flag Beaches.

Plett highlights include an ethical wildlife experience at the Tenikwa Wildlife Awareness & Rehabilitation centre. This not-for-profit organization focuses on education and offers daily tours where you can learn about South African wild cats and other local species. Conservation is key to Tenikwa, which runs rehabilitation and recuperation facilities where injured or abandoned wildlife can be rehabilitated according to strict protocols, so that they are given a second chance to be returned to the wild where they belong.

Ocean Blue Adventures offers a two-hour ecological adventure, which leaves from Plett’s Central Beach and heads east past a bird sanctuary, traverses the bay, and cruises back along the inside of the Robberg nature reserve. On the tour, you will usually encounter dolphins, some shark species, seals, pelagic seabirds as well as Southern Right and Humpback whales, in season.

Explore Robberg on foot another day. This pristine nature reserve is also a national monument, seeing as rocks here date back 120 million years, and evidence of middle and later Stone Age inhabitation has been found in some of its caves. While walking, keep an eye out for the rare blue duiker and remember that Robberg is also famous for its Great White Shark sightings in the ocean below, so keep a sharp lookout for the telltale shapes in the water. You can also view the highest navigational light on the South African coastline, at the Cape Seal Lighthouse, which is 146m above sea level.

Discover the world’s first free-roaming multi-species primate sanctuary, Monkeyland, a modern sanctuary established in a pristine high canopy forest. All primates live in a natural environment. As a visitor, you will be privileged to step into the world of these primates to explore and learn fascinating facts first-hand while experiencing some of the planet’s most unique species. 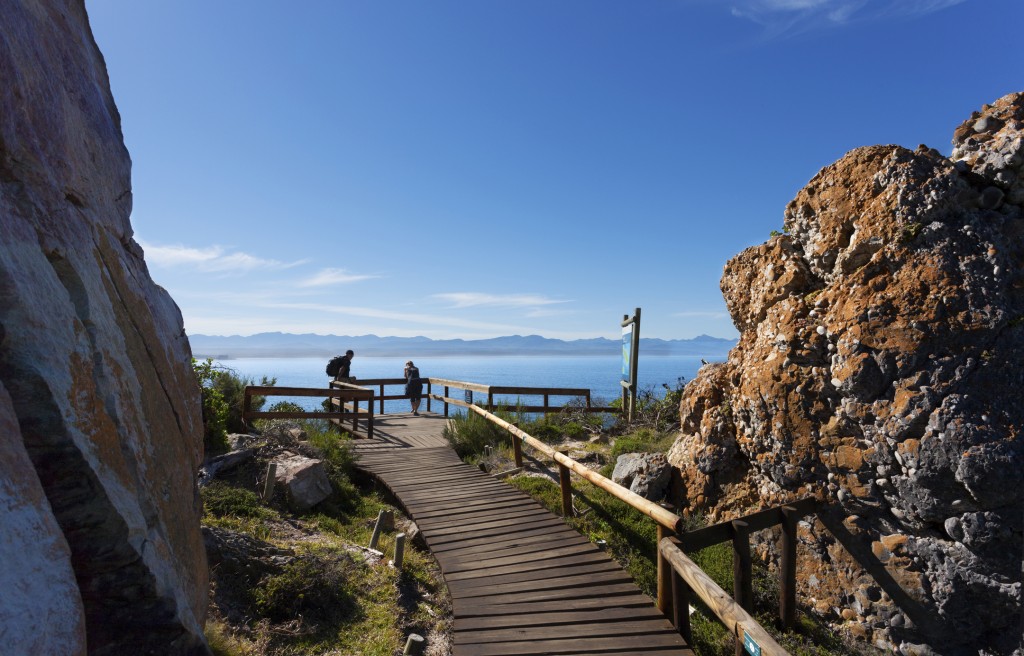 Embrace your inner adventurer with the The Tsitsikamma Canopy Tour consisting of ten platforms and ten “fufi” slides, the longest of which is 80 metres in length. The platforms built high up in the giant Outeniqua Yellowwood forest, provide an unbelievable view of this enchanting world. Two trained guides accompany the tour and ensure the safety of each group while enthusiastically pointing out any interesting plants, birds, or animals along the way.

If that’s not enough adventure for you, see Plett’s glorious nature from a different perspective – upside-down! Bloukrans Bungy, the world’s highest commercial Bungy bridge, is also the highest commercial natural Bungy jump in the world, at 216m above the Bloukrans River. The Bungy jump takes place from the top of the arch of Africa’s biggest bridge and the jump spot is reached via zipline. After your jump, you’re winched back up to the arch’s top and from there, you return to land via a suspended walkway bolted to the underside of the bridge. Extraordinary!

And also worlds away from the ordinary, is a luxurious accommodation offering, The Plettenberg. Situated on a rocky headland that affords incredible sea views, the hotel offers a unique escape with a selection of Five-Star Suites, private Villas, and Sea View Rooms, along with an on-site spa.

While at the hotel, R&R is a must. Lounge beside one of their two infinity pools while taking in some of the most breathtaking vistas in Southern Africa. The Plettenberg boasts views of the ocean, mountains, and endless stretches of golden sand. Alternatively, take in the magnificent sea views from the comfort of your sea-facing room, where you can watch the waves for pods of dolphins. It’s the ultimate Garden Route oasis and a fitting base for an unforgettable time in Plettenberg Bay.